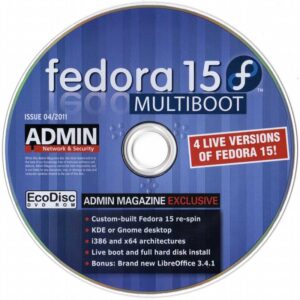 As some of you might know I started writing for the German Linux Magazin in April. I am now in the lucky position to know quite a few people at Linux New Media and one of them asked me if I had an idea for the DVD they ship with their magazine. Of course I had: A Fedora Multiboot DVD.

First the editors were a little skeptic: Fedora is not that popular in Germany and many people still think it’s too bleeding edge, so Linux Magazin usually ships with save bets like Ubuntu or OpenSUSE. But when I told them about the new amazing features of our Multiboot media such as automatic detection of the CPU architecture and offered them to do a custom German spin, they agreed. So I made a prototype and it has taken a shine to them. 3 days later they asked for an English version, so it now ships not only with the German Linux Magazin but also with the English Admin Magazine. Look out for it in

I was told not to mention the exact number of media but trust me, it’s huge. It’s more media than the ambassadors produced for the last 3 or 4 Fedora releases worldwide.

And yes, I am fully aware that this media violates several guidelines and policies.

Speak up if you think I have done harm to the Fedora Project!