Fedora 22 is just around the corner and while upgrading my machine, I decided to completely ditch Gnome’s Evolution in favor of Mozilla Thunderbird. I had already switched a while back, but still had tons of mail in an old local Evolution account I wanted to migrate.

Unfortunately all HowTos I found on the web assume Evolution would store mail in the mbox format, while it switched to maildir in version 3.2.0. MozillaZine suggests to first convert maildir to mbox and then import the resulting files with the ImportExportTools extension. Why so cumbersome if there is the excellent Dovecot IMAP server that can read both maildir and mbox?

Then set it to use Evolution’s local storage as mail location:

Fire up Thunderbird, configure a new account for your user on localhost and copy over all mail from this account to the „Local folders“. There you go!

We all know New Year’s resolutions don’t work out, at least most of the time. One of my resolutions for this year was to completely reboot my blog and blog more regularly. It’s already July, so as you can see, it didn’t work out. In fact, I blogged less than ever before this year or since I started using Google+ and – a little later – Facebook.

However my use of social networks has changed. While I initially was very keen on protecting my privacy and only shared posts with interested people, over time I have become more open. By default I now share my posts with all my circles and friends. I think it helps them to get a better and bigger picture of me. And I share a lot of stuff with the public. I do have very strong views, especially on things that bother me. That is mainly politics and ethics as well as Free Software and culture. Why not share my thoughts with the public? Why not (try to) shape the public opinion?

This is what I will do from now on. I will continue to use social networks, but I will try to blog about the stuff I post publicly, at least if I consider it worth it. If a topic is complex or a post is elaborate and contains lots of references, it’s easier to blog anyway.

What can you expect from me here in the future:

Last weekend I attended Linuxwochen Wien for the first time. I heard a lot about the event, so I totally wanted to go there. Now that I’m back from Vienna, I am a little disappointed – but nevertheless happy I went there.

The Austrian Linuxwochen (Linux Weeks) is a series of events all over the country. It started in Graz, but there is also Eisenstadt, Krems and Vienna. The event in Salzburg is delayed until further notice, Linz was canceled off this year (only the LUG meeting took place) and Klagenfurt seems dead for years. Overall not very encouraging, but we wouldn’t be Fedora if we were not to change that. So we brought 7 people to Vienna which were supported by two locals, Kevin and Volker. Both did an excellent job, even though they are (officially) no ambassadors. Together we submitted 16 talks and workshops. All were accepted, this is roughly one fourth of the 3 day program. I delivered two talks, one on Kolab and one on postscreen. Both went very well and I’m very happy about the feedback I received. Overall the talks and workshops were very interesting and the speakers very competent.

Fedora delivered a good show. We had by far the biggest and most professional stand and lots of goodies. As a special gimmick Miro had brought his 3D printer and as always it attracted a lot of people. The rest of exhibition however was not impressive. That’s a well know problem for events where the focus is on talks, but this one was worse: It was moved to a new building with more space on the hallways, but the number of exhibitors hadn’t really changed. The booths looked quite lost and there were hardly visitors as most people were attending talks. On Friday we had at least some students from the university showing up and hoped for more people over the weekend, but that was wishful thinking. Maybe it was bad promotion, maybe the weather or a combination of both.

The weather in Vienna was bad compared to Berlin, but on Saturday afternoon it changed and the rest of the weekend turned out to be very sunny. As there were not many visitors and we had more than enough people at the booth, later that afternoon I decided to go for some sightseeing. People told me Vienna is beautiful, but I hadn’t seen anything of that beauty. I have been to Vienna before, but usually it was just for transfer at the airport or on my way to Brno. So I went to the historic city center and I have to admit, it really is impressive. There are a lot of buildings from the imperial times of the Austro-Hungarian monarchy and also from the Art Nouveau (or ‚Jugendstil‘ as we call it) era. I love Jugendstil.

On Friday we had a social event. It wasn’t really a social event, instead we just went to a Chinese restaurant down the street for an ‚all you can eat‘ buffet. We were around 30 people and I was lucky to sit next to Bernhard. We talked about packaging and he asked me if I could help him with continuous integration of rpm build. It turned out Bernhard is a FreeRDP developer and told him I’m the maintainer of remmina in Fedora. Remmina is a GTK-based RDP, SSH, NX and Telepathy client, developed by the FreeRDP project. It’s powerful but in bad shape as FreeRDP is still a young project and constantly moving forward. Unfortunately there haven’t been stable releases for quite a while and backporting fixes is cumbersome. So we agreed that FreeRDP will try to maintain a ‚release‘ branch in git, even if there are no actual releases, and we will help them with continuous integration. If Mads, our FreeRDP maintainer, agrees we will build and host nightly versions of Fedora’s freerdp and matching remmina packages. An interesting project and I’m looking forward to it.

My flight back to Berlin left very early on Sunday morning. I had to get up at 5 am, but it allowed me to be in Berlin at half past eight and enjoy a sunny Sunday after which I was very tired – but happy.

Not sure I will attend Linuxwochen Wien next year, we have other awesome people to run the event. Personally, I learned some important lessons:

Thanks everybody for making Linuxwochen a successful event. A special thanks goes out to Sirko for being a perfect event owner. He took care of everything, not just the booth and apartment and he was a good tourist guide.

please don’t use a programming language for configuration files. Seriously. Don’t. Just don’t. You are only making live hard for people.

I think this is pretty straight forward, but some people found it confusing and too complex. So David rewrote it. 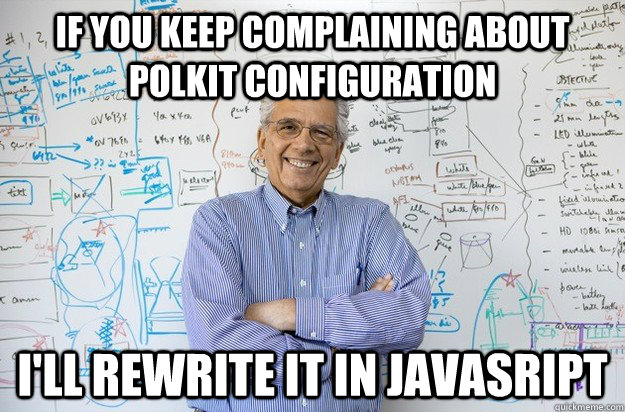 What do we learn from this? 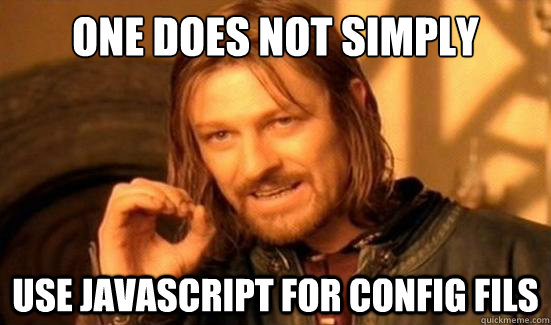 Beware: This is only a workaround and can cause lock-ups of the composer window. Instead of using nepomuk, kontact should be using akonadi to directly and only query you address books. Using nepomuk will query all you indexed data, such as emails and documents, and depending on the amount, the performance can be problematic. That’s why nepomuk is disabled by default.

Thanks to Christian Mollekopf and Till Adam!

It turns out we have to leave early. Some people need to travel home and others have family duties – or both. Fortunately we worked hard and managed to complete our agenda.

For now, I just put all the results, todo items and open questions into the wiki. It’s still a rough draft, I will clean it up, format and elaborate it later today. Some of the most important decisions include:

Still, the real work begins after this FAD. We need to implement what we discussed, whether this is in the wiki, in trac or on various events. But we have gotten a new boost for our community and we are very optimistic that it will have a big impact.

Thanks everybody for coming and especially to Gerold for making this event happen.

So we are sitting at Beuggen Castle and having some drinks after an awesome social event: A dinner in complete darkness at a restaurant called „Blinde Kuh“ („Blind cow“). If you have not yet had it, give it a try, it’s very interesting experience.

The first day of FAD EMEA turned out to be very productive. We managed to discuss a lot of topics, most importantly:

I am going to add all relevant info to the wiki later, because a lot of the topic we discussed needs to be followed up. Tomorrow we’ll have some more discussions, but given that we are already more than half way through the agenda, we should have some time left to document and implement our results. This mainly is wiki gardening an improvements in our trac instance.

Stay tuned for another blog post before I fly home tomorrow. 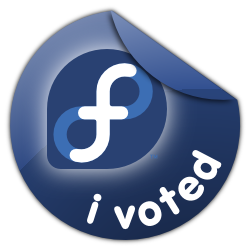 This is the final reminder that the Fedora 19 naming collection ends today at 23:59 UTC. This means you have 5 hours left to propose a name. Before proposing a name, please make sure to read the guidelines.